Yasir Afzal didn't need much time at all to describe his experience interning in NYC.

"Felt like home," he said, a simple three-word statement which embodies a feeling every NYC newcomers hope for.

The man who hailed from Richmond, Virginia, had stayed at Outpost Club's Knickerbocker House throughout his 10-week internship program at McGarryBowen in June last year.

It was, in his own words, "the best decision I could have made when moving to NYC as a first-timer."

Having experienced life in the Big Apple, Yasir now wished to share the things he had learned with others who have either recently moved to the city for an internship, or those who are planning to do so in the near future.

So read on to learn more about his experiences, and maybe pick up a tip or two on how to make the most of your time in one of the most exciting cities in the world.

Q: Tell us about your internship experience here. 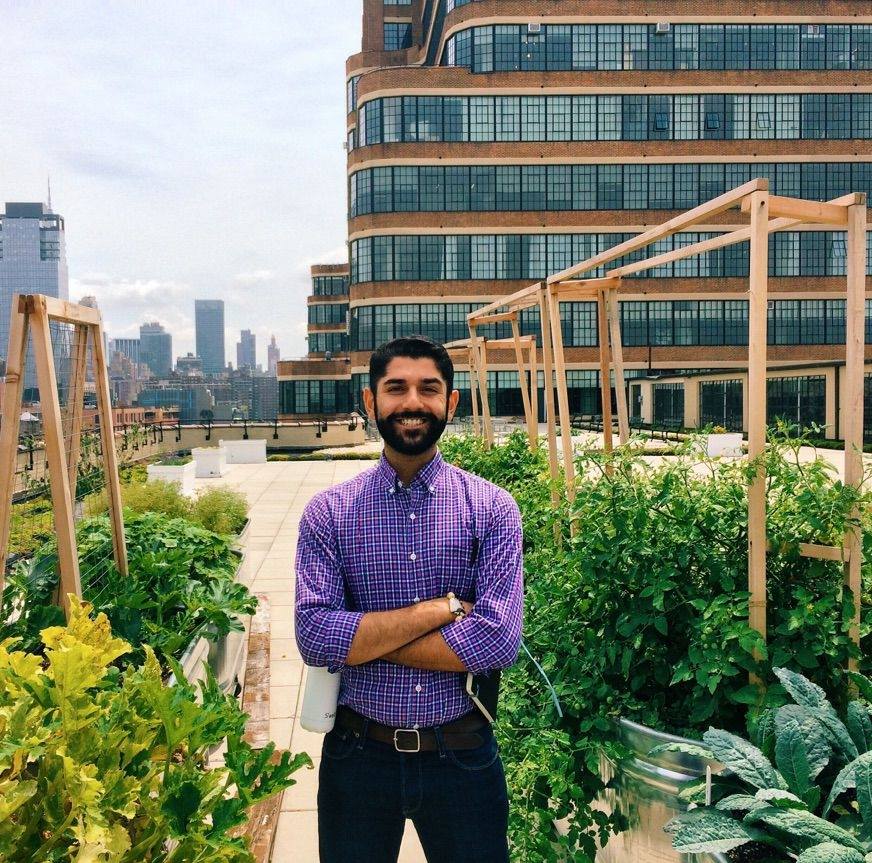 YASIR AT HIS INTERNSHIP WITH MCGARRYBOWEN

“Overall, being an intern in NYC allowed me to gain the confidence already within me to do something I never thought I’d be able to pull off. Fake it till you make it I always say.”

I, along with 16 other interns, were split by department and given accounts to work on over the course of the internship. Interns ranged from juniors in college to a 30-year-old who wanted to become an advertiser.

Throughout the internship, mentorship sessions/workshops were set up by HR where industry vets and agency employees would share valuable information about the advertising world.

I was able to work on high exposure brands which I was then able to see in real-world settings (i.e. TV spots).

Q: What was the most exciting bit about your internship?

I got to meet Jim O’Heir, who plays Jerry Gergich on Parks and Recreation. He wrote and starred in an indie movie where one of my agency’s Creative Directors helped produce. I, along with four other interns that RSVP’d to go, met him for drinks in a fancy bar in Times Square beforehand, and got a private viewing with Jim and other cast/crew members at the movie theater around the corner. All drinks and movie tickets were paid for!!!!

Ya know, just a normal Wednesday in the Big Apple.

The morning of the Summer Solstice, I got to practice yoga with about 200 other yogis in the middle of Times Square. The event was sponsored by Aerie, and we all got to keep the yoga mats they branded.

After it was done, I hopped on the subway and was still able to make it to work on time. Definitely a surreal moment finding peace and tranquility in the middle of all the hustle and bustle that is Times Square at 8 a.m. on a weekday. 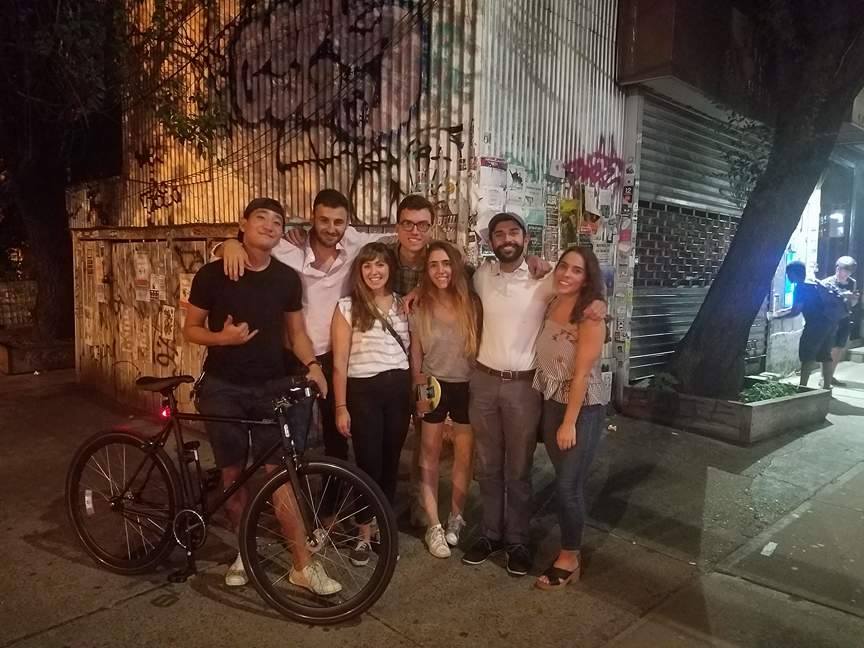 Q: What were the challenges you faced?

“NYC has no time for second guessing.”

It was very easy to get left behind both in the city itself and in the workplace, so I really had to make an effort to be seen and heard.

BUDGET. I spent waaaaay too much on alcohol. Pregame > buying drinks at the bar.

(Also), living with a roommate can be tough, but living in a whole HOUSE of roommates can be even tougher. Find your balance.

Q: How did you overcome these challenges?

“Leave your old life behind and come to NYC to start a fresh, new one.”

While it is fun meeting new people, having to also live with them can be a challenge. I definitely had to have an open mind and prioritize RESPECT. If you use your time in NYC and at Outpost with positivity, then you’ll be able to make friendships that’ll last a lifetime!

In terms of packing, think minimalist. Be open to the city. Make eye contact with everyone. Talk to people you wouldn’t normally talk to. Try new cuisines. New York is the portal to the world. There are so many languages spoken in the city and so many different cuisines to enrich your pallet.

Stay aware of your surroundings and always make sure you have your wallet, phone, and keys on you. BRING AN EXTERNAL CHARGER. It’s a scary feeling when your phone is on low battery, and you just took the wrong subway and got yourself lost (happened to me multiple times). Carry some cash for drunk munchies at Halal Cart at 1 a.m.

Q: How did your stay in Outpost Club help you overcome the challenges you faced?

“They helped relieve so many stresses and took care of a lot on the domestic end.”

That really helped in terms of me being able to allocate a lot of my time and energy on other things.

Since I graduated college a couple of weeks before I moved to NYC, I was already under a lot of stress and pressure. So it was so nice to be able to rely on Outpost for a lot of the trivial stuff, like not having to bring toilet paper or having to worry about keeping kitchen necessities stocked.

Outpost also has really good locations throughout New York City that are near public transit and grocery store, so I always felt like I was in the middle of things and not on the outskirts of town.

Q: Did you find the environment and the facilities provided by Outpost Club helpful for your internship?

“NYC is so full of different energies; it was nice to have a place to come back to and feel a sense of calm.”

My time at the Knickerbocker House was clean and spacious. I just had one roommate, which really helped space-wise. Very modern aesthetic and positive energy. 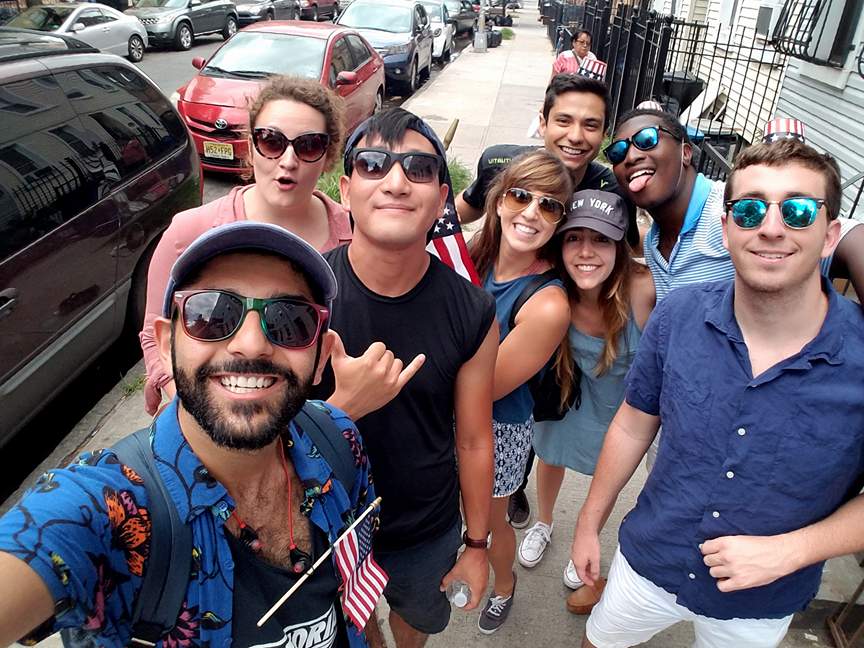 Q: What should the future interns expect from their stay here?

“Coming into the house I never expected to meet people I felt so connected to.”

If you are staying long-term at an Outpost house, be involved! Meet everyone in the house and share your life with them.

Obviously, you can’t make friends with everyone, so just stay as respectful and positive as you can, and everything should be just fine.

“People don’t remember what you did, they remember how you made them feel.”

Be yourself and enjoy your time in one of the greatest cities in the universe. I certainly did.

Want to know more about Yasir and Outpost Club? Follow us on our social media.

Tacia Duarte loves anything and everything that shouts "Community!"

What do you do when your best friend's birthday falls on a weekend?