How to celebrate Women's History Month in NYC

Ne-Bo
Blog
How to celebrate Women's History Month in NYC

How to celebrate Women's History Month in NYC

Women are great. So great that in 1987, after being petitioned by the National Women's History Project, Congress named March as Women’s History Month. Here are our suggestions for how you can pay tribute to incredible women everywhere, both past and present, in NYC this March.

Catch some feminist cinema at Williamsburg’s Nitehawk Cinema. This independent theater is celebrating Women's History Month with a series of films featuring the most badass heroines, from Tank Girl (March 8 and 9), to Edge of Tomorrow (March 16 and 17), and Buffy the Vampire Slayer (March 23 and 24). Find the full program here, with tickets priced at $13.

Or how about celebrating your witty sisters with some female comedy? Comedy is still an area that’s dominated by men, so help balance things out by trying shows like Party of Two, an all-female show at The Tank hosted by Vanessa Valerio and Anita Flores on March 9. You’ll love their take on the hilarious discrepancies between movie depictions of dating in New York and the seedy reality.

If art is more your thing, head to the Brooklyn Museum to see The Dinner Party, an iconic piece of 1970s feminist art. This massive, triangular ceremonial banquet table with 39 place settings commemorating important women from history is being presented as the centerpiece of the Elizabeth A. Sackler Center for Feminist Art this March.

Want to support women in sport? She’s on Point! A Celebration of Girls in Sports is your chance. Join NYC Parks on March 24 for a free day of sports and group activities, including soccer, basketball, double-dutch, flag football and cheerleading. There will also be sports clinics to learn new skills, so check out the Eventbrite page to register.

Show your support for today’s women by volunteering with Women in Need, an NYC non-profit that provides safe housing, critical services and ground-breaking programs to help homeless women and their children rebuild their lives. Choose from volunteering your administrative skills in the Bronx or running art activities for their after-school programs in Brooklyn. 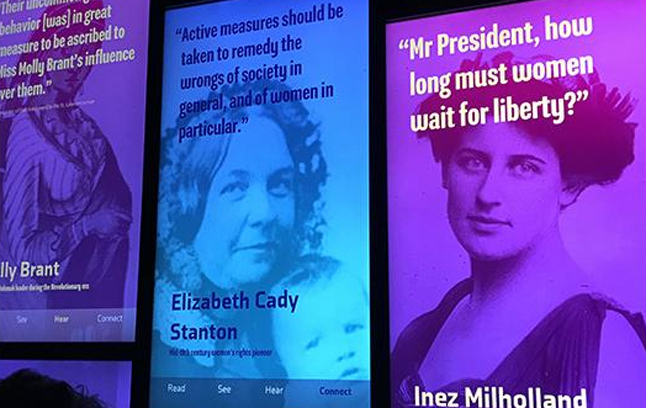 For an overview of how far women have come in history, check out Women’s Voices at The Center for Women’s History this March. This multimedia digital installation highlights the hidden connections among women who left their mark on New York and the nation. Featuring interviews, profiles, and biographies, Women’s Voices tells the stories of activists, scientists, athletes and social change advocates, from the first Latina Supreme Court Justice, Sonia Sotomayor, to Nobel Prize-winning scientist Barbara McClintock, and more.

Or try one of the workshops, activities or performances at the Apollo Theater’s Women of the World Festival. From March 12-17, the theater is running a full program of artists, community leaders, writers and activists, exploring a variety of cultural and civic issues, with a focus on female empowerment. Speakers you can gape at in awe include musician Alice Smith, White House Correspondent April Ryan and Poet Nikki Giovanni.

Dun-Well Donuts is our favorite place to satisfy our sweet tooth in East Williamsburg. Located on Montrose Avenue, ju...

New York is an exciting place to be in the spring. Check out our picks of the best spring festivals.